Holistic Biological Dentistry also addresses the chronic health effects from the release of toxic metals from non-compatible fillings and prosthesis as well as implants. Pioneered in Germany, Holistic Biological Dentistry focuses on treatment and therapies that is non-toxic, biocompatible and supportive of the immune system.[/vc_toggle][vc_toggle title=”Toxic Dental Fillings”]Mercury, a known poison, has been used in dental fillings for approximately 160 years. Despite the concern of many dentists, mercury amalgams were used because of their low cost and ease of use. Over the past few years, scientists over the world have conducted numerous studies showing the serious adverse health effects of mercury fillings.

Each time you chew, brush or grind your teeth, mercury vapor are released from these fillings and absorbed by the body and brain. Many previously unexplained symptoms have been traced to this chronic mercury exposure: headaches, depression, faulty memory, sleep disorders, chronic fatigue, migraines, arthritis, allergies and multiple sclerosis. Damage to the brain, heart, thyroid, nervous system, adrenal glands, and lungs is also possible.

Caries and diseases of the gums and dental-fixating apparatus are among the mot prevalent afflictions of modern civilization. Such defects can be observed in individuals of all ages. Large-scale studies have revealed over 90% of the population sustains damage to one or several teeth by the age of 9 years. Roughly 80% of all adults over 30 show symptoms of pathological alteration of the gums and on setting periodonthosis. Nearly one in every two persons between the ages of 35 and 45 years is dependent upon at least a partial dental prosthesis.

These statistics clearly underscore the enormously important role which good dental plays in the health of our entire populace. Over the course of the past several years, however, the established methods of treatment – such as caries prophylaxis through fluoride application and the usage of amalgam – have been increasingly challenged and criticized.

In light of these facts, growing numbers of dentists have chosen to seek a means of providing effective treatment for their patients while simultaneously maintaining a minimum of side-effects. For a great variety of dental indications, antihomotoxic combinations-preparations are available to provide such means.

Just pulling the tooth is not enough. Tooth extraction sites may not fill in with healthy bone if socket lining (periodontal ligament) is not removed completely or fails to break down in the healing process. Bacteria and toxins remain trapped beneath healthy appearing tissue. This focal infection of the jawbone (N.I.C.O.) is a form of osteomyelitis and is a continuing strain on the immune system of the body.

Removal of the infectious tissue and toxins from cavitations is an essential aspect of maintaining good health.

Ozone has been successfully used in medicine because of its microbiologic properties for more than
100 years. Its bactericide, vitrified, and fungicide effects are based on its strong oxidation effects
with the formation of free radicals as well as its direct destruction of almost all microorganisms. In
addition, ozone has a therapeutic effect that facilities wound healing and improves the supply of
blood. For medical purposes, ozone may be applied as a gas or dissolved in water.

When a high enough concentration of residual ozone (ozone that is not instantly reacting with
substances in the environment) comes in contact with bacteria, the ozone reacts. Kinetic energy is
released, and the single “activated” atom of oxygen is liberated, destroying the cell wall of the
bacteria. Once the cell wall is ruptured, the cytoplasm is dispersed, and this it is impossible for the
bacteria to reactive. This is a process known as cell lysing.

Due to the fact that the ozone does not need to penetrate the cell wall, activated oxygen kills
pathogens 3,125 times fast than chlorine, and without any chemical toxic residue left behind by the
ozone.

How much ozone is needed for disinfection? Ozone’s kill rate is proportional to its residual
concentration. In one study, at 500 to 600 micrograms of ozone per m3 for one hour, 99% reduction
in all bacterial special was observed.

The above studies were done by testing ozone against air-born bacteria. In fact, ozone kills bacteria
6,000 times faster than chlorine, when used in water.

Ozone destroys viruses in a similar manner as bacteria. Ozone breaks apart lipid molecules at sides
of multiple bond configurations, once the lipid envelope of the virus is fragmented and its DNA or
RNA core they cannot survive.

While the fungus is more resistant to ozone than bacteria and viruses, ozone still gets the job done.
Fungus inhibited and destroyed by ozone include: Candida, Aspergillus, Histoplasma,
Actinomycosis, and Cryptococcus. The presence of many disulfide bonds had been noted in these
types of Fungi, making this a possible site for oxidative inactivation by ozone.

The Cleansing Power of Ozone: Activated Oxygen Oxidizes and Discomposes Matter.
Ozone oxidizes and/or ionizes many forms of matter. The great benefit of this process, considering
practical applications, is ozone’s ability to alter, discompose and/or neutralize materials that are
toxic, without creating additional toxic compounds from the use of ozone (as is the case when using
chemical compounds). Ozone will oxidize metals (except gold, platinum, and iridium).

A root canal is a mummified tooth structure that has been treated to be preserved. When the tooth is infected it has aerobic bacteria once the root canal is performed the only part that is cleaned in the entire tooth is the canal itself, but the tooth structure is composed by two or three miles of dental tubules that still contain the bacteria that then turns into anaerobic bacteria that is expelled to the bone attacking your immune system producing degenerative diseases, this has been proved by Dr. Weston Price.

It was recommended to me by Dr. George Meinig, the author of the book Root Canal Cover-Up, to remove all the root canals in patients that have degenerative diseases and cancer. It is a dead entity in your body.

So at this point it’s your own decision to have a root canal done or not. 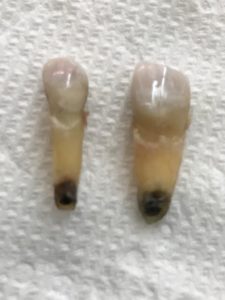 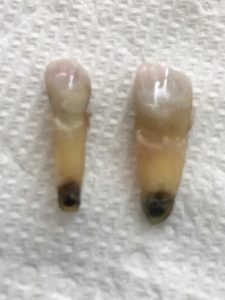 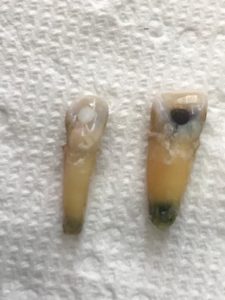 Do you really want a root canal?